This morning I woke up with a nice tan. Perfect, really. It’s almost as if I’ve been to a beach holiday for a week and managed to get the most even tan ever, without the dryness. And yes, obviously my color is from a self tanner. I’ve been trying out a new one that I really like.

But that’s not the point of this post – just a nice detail (I’ll tell you about the product at the end of this post). 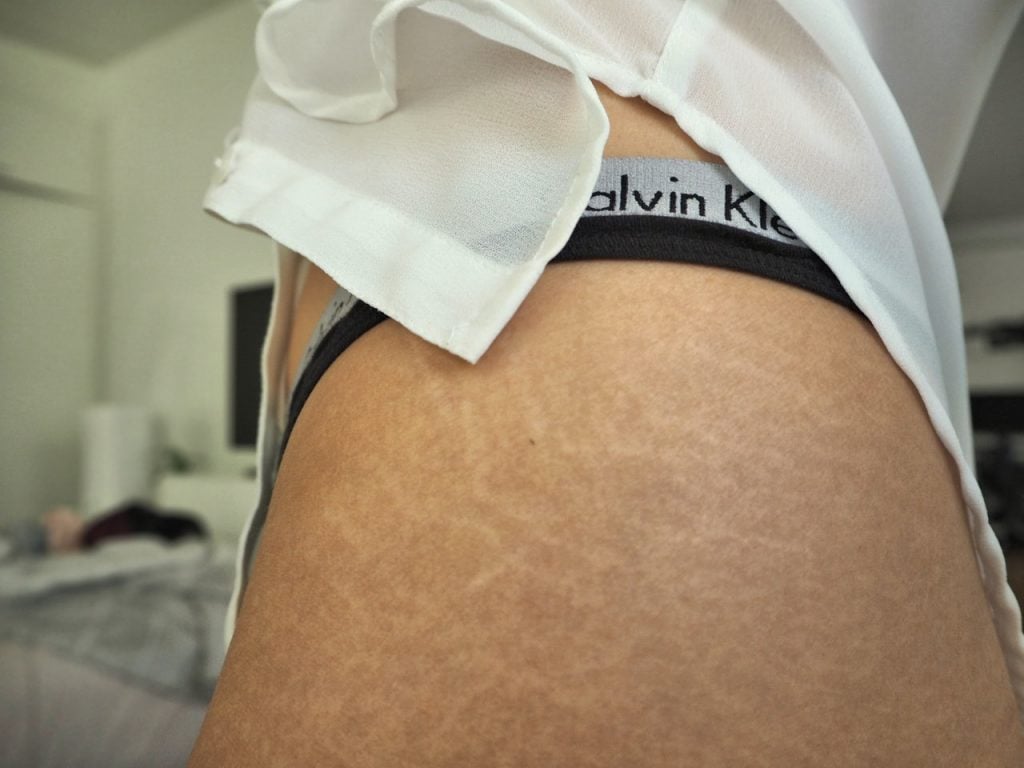 I woke up with the tan and I realized that it made my stretch marks really stand out. A real tan does that as well, mind you. The skin on my scars is lighter, smoother and different and that makes them stand out especially when I tan.

I was reminded, that I’m actually full of those scars. And when I say full, I mean full. That might surprise you – even though I’m normal weight or skinny in some standards, and have never really been much bigger than this, I still have stretch marks.

And since it’s the bikini season and there are so many women and men being insecure about their bodies and imperfections, I wanted to talk a little about #scarpositivity. 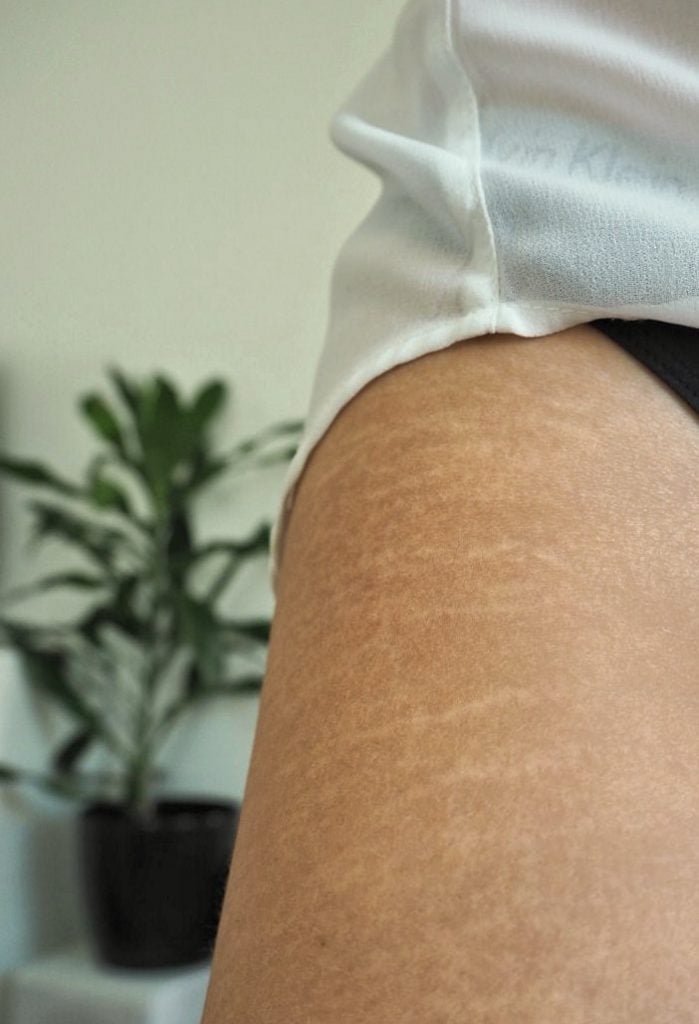 I have stretch marks on my back, on my hips, on my butt, thighs, shins, arms and boobs. My body is full of them, especially the womenly parts. I got them when puberty hit me and I think one of the reasons I got so much of them was because puberty hit me hard. I grew up quick, literally. After anorexia and other eating disorders, suddenly my body went from very thin to normal. I’m pretty sure my eating disorder prevented me from growing up gradually (if that makes sense?) and when I finally started eating better, my body could change.

My post on eating disorders: Living with the monster

And then again, I think I’m just one of those people who get stretch marks easily. The scars on my back came when I was very young, before puberty. I remember my school doctor looking at my back and saying, that usually only boys get those linear scars. A comment that a young girl doesn’t necessarily want to hear, mind you.

But here I am. With my scars. And you know what? I don’t mind them. At all. (Okay okay, there are moments where the scars on my inner thighs slightly upset me.) 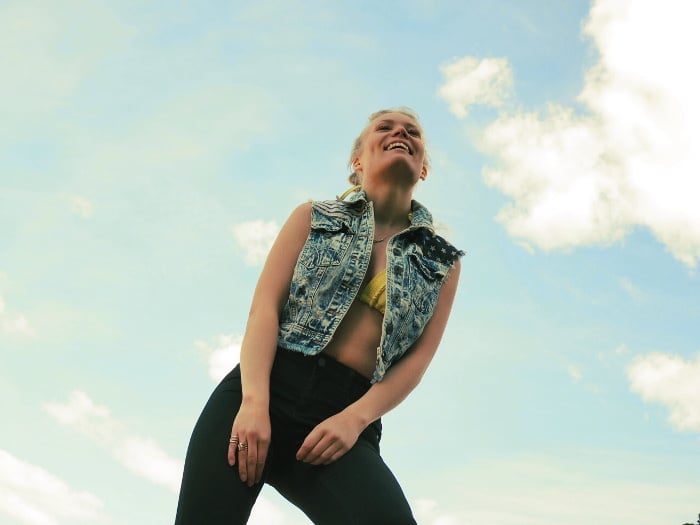 And yes – when they were bright red, in my teens, they were the most horrible thing in the world. They were red. They were visible, if I was wearing an open top. I was angry.  I was finally becoming a woman, but at what cost? I was a red-striped zebra – definitely not something I signed in for.

But here I am and I’m okay. They turned out to be just skin (who would have guessed?). They got lighter. They became my skin. They are not visible, not really. Only if you know to look for them.

And I’m not sure why, but I feel calm and reassured now. The marks on my body, they didn’t matter. They didn’t prevent me from living my life.

So whatever is on my mind now, stressing me out or making me feel ugly – I’m pretty sure in ten years from now, it won’t matter. Or if it does, it’s only making me stronger.

I guess I just really wanted to say, that stretch marks and scars are normal. They are just skin. I have lots of them and I’m pretty sure if I ever got pregnant I would have a ton more. They could upset me for a while, after which I would accept them and move on.

Loving your own body and skin – now there’s a beautiful thing to remember and cherish.

I got gifted this product from lookfantastic. *adlink

The self-tanner I used was *minetan’s  1 hour express tan in the shade Super Dark Violet. I’m not sure if the color really matters (there are different options), because the active ingredient is your basic DHA. I really like this self tanner. It’s easy to apply with a mitt, it blends easily and dries quickly. That’s one of the benefits of a foam – they are the lightest option when it comes to skin feel. It gives a natural looking tan, that is not orange.  It lasts pretty well on my skin and wears off gradually, which is a good thing as well. I also used the *minetan mitt, which made the application process smooth. I really recommend using some mitt, that way you don’t have to worry about orange hands. 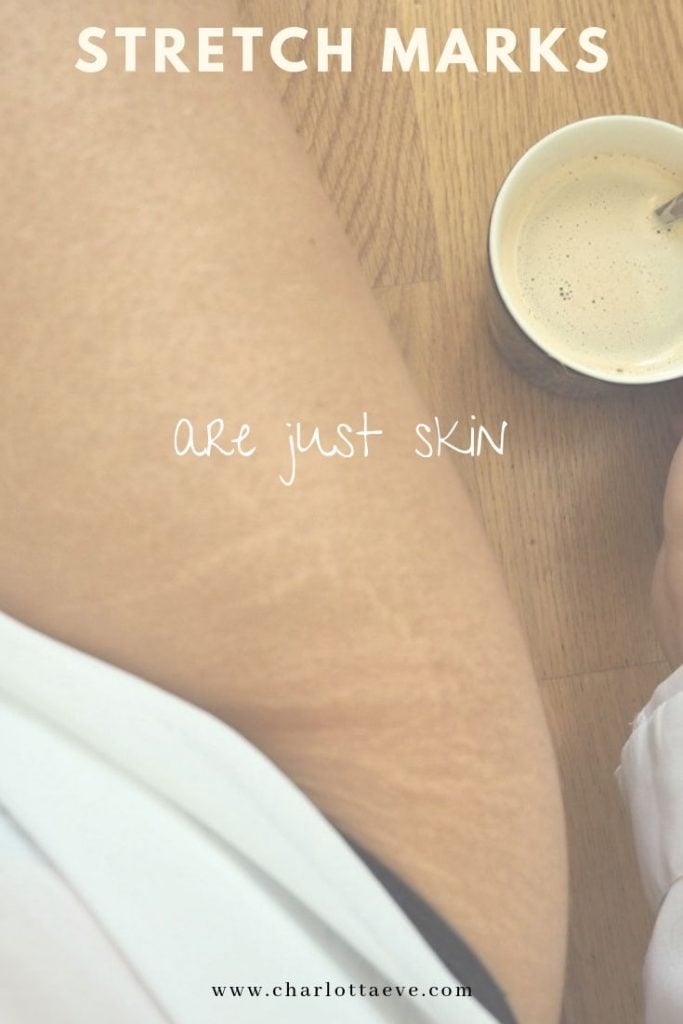 I’m proud of myself.

There’s a sentence that’s pretty hard to say out loud or even to think about. I’d much rather heard someone else say it to me, to hear them being proud of me. Somehow hearing it from someone else is more believable than saying it yourself. And I don’t like that – because you need to be your biggest cheerleader.

And I’m not. Not always. It’s a little too easy for me to fall down and have doubts about everything. 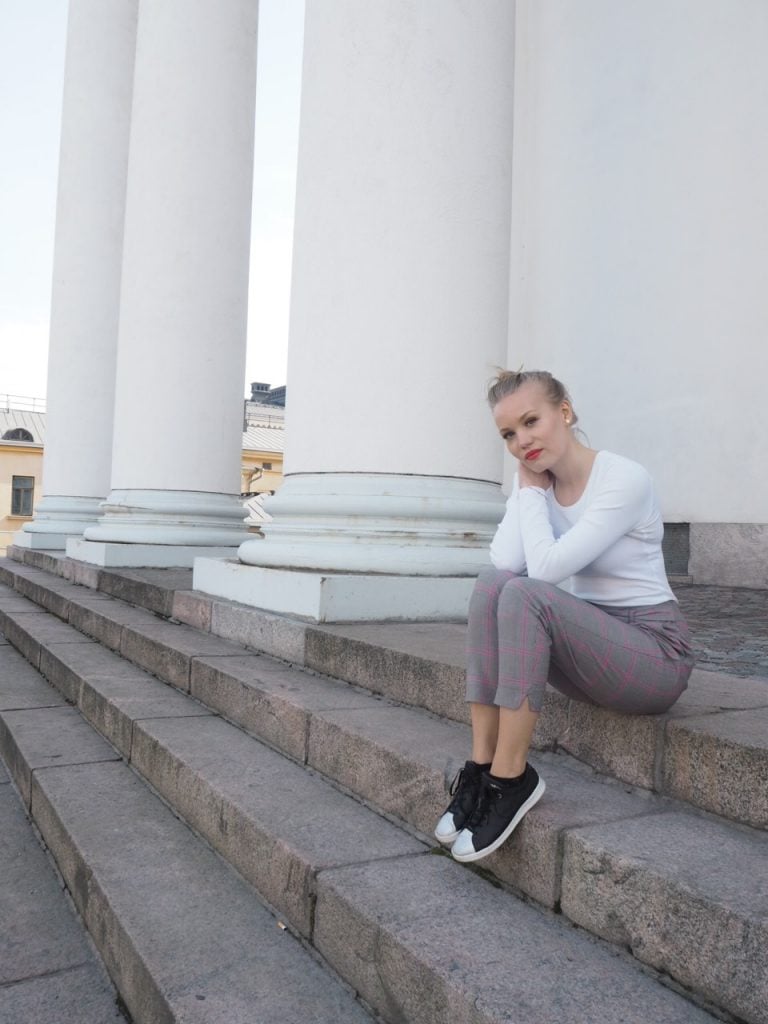 Though to be honest – it doesn’t hurt to hear that from other people as well. I’ve never heard my father say anything uplifting about me or my accomplishments, but today my brother said that he’s proud of me. As someone who’s actually been in my life, that means the world.

And thinking of that, I have several occasions that come to mind, where someone dear to me has said it as well. It warms my heart. Love is such a beautiful thing, isn’t it? Somehow it’s wandering into this text, though I didn’t know it had anything to do with this subject. But it kind of has a lot to do with everything, doesn’t it?

Today I felt encouraged and I wanted to write down some things that I’m really proud of. I wanted to write it down and say it – I’m proud of myself. I also ended up revealing things about myself, that I’m pretty sure you didn’t know about. Actually, it turned out to be a piece of my life story, but oh well, that happens. 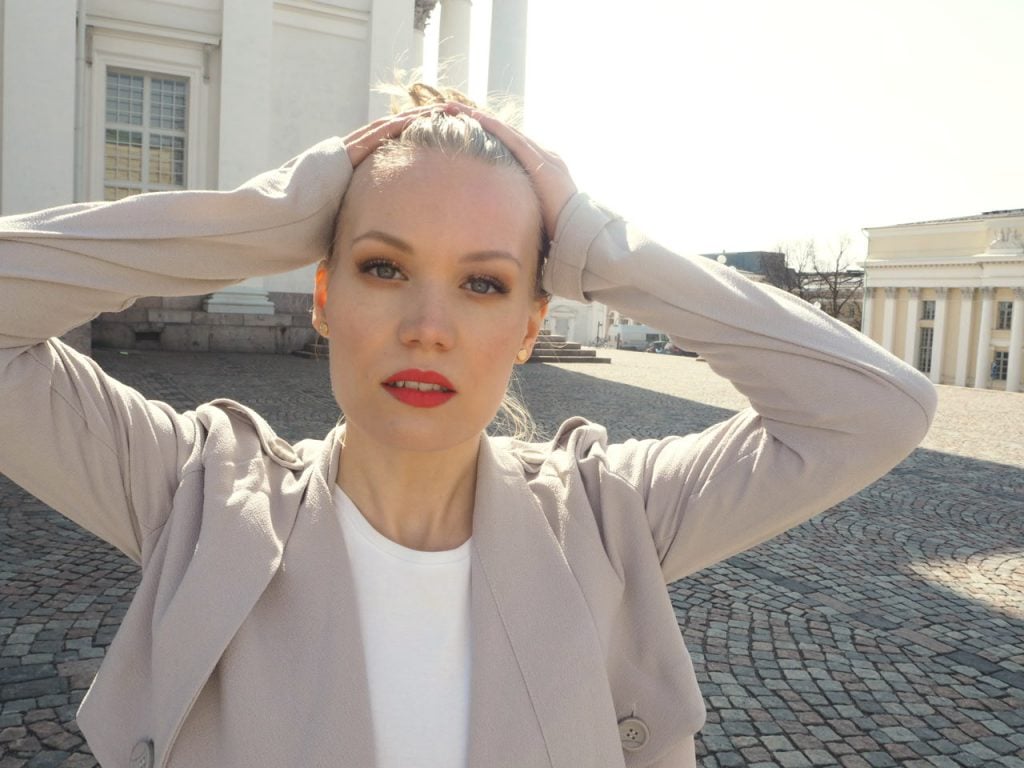 1. Graduating both high school and beauty school – and even choosing dual qualification in the first place

Today we’re celebrating Vappu in Finland, where it’s typical to wear your Finnish student/ graduation cap. I love that day and I feel proud of having that cap. I’m proud of myself, for knowing so well where I wanted to go and what I wanted to study. I had such good grades (another thing I’m proud of) I could have chosen just beauty school, but I also wanted to have a high school diploma, so I took dual qualification.

And here’s why having that qualification is so meaningful to me: that was the hardest time of my life. My life fell apart while I was in school. I was so depressed I barely made it to school some days. And then I took a sick leave, and another and another. I think all in all I was away from school for half a year, or something like that. It still sickens me, that some girls in my class were talking bad about me for ‘being sick all the time’, while I was literally fighting for my life. Then again I guess it was better this way, because I both got and had to finish school alone. That was also hard for me – attending classes without any friends, alone.

And failing school. Even in the hospital I wanted to attend to matriculation exams, because I was so used to over achieving in school.  It was good to let go. I learned, that it wasn’t the end of the world. That I could reschedule and still graduate.

And I did. I graduated. And it felt so good. And I’m so proud of myself for that. 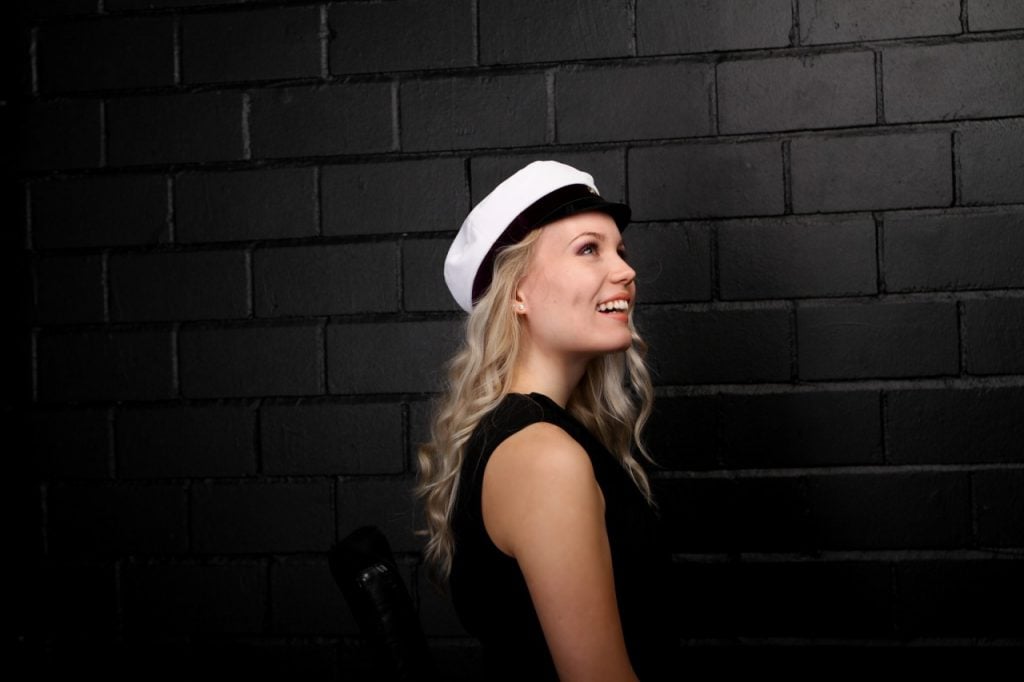 2. Having a good job – and then having the guts to leave it

I had a job right when I graduated and actually even before that. I was lucky to have a job in my profession, because it’s not that easy to get (especially with a good salary). I also got promoted in my second job (another beauty salon) pretty quickly. I had a salary I could only dream about – in my age and with my experience (though I had some, because of working while I was studying) that was the best I could get, really. For a while it was great, even though I had some doubts.

Gradually the environment in my workplace turned out to be not that great. I was super stressed and pretty often came crying from work. I spent Sundays in bed – literally – because I was so exhausted physically and mentally. It wasn’t what I wanted to do anymore.

It would have been smartest to look for a new job, get it, and only after that resign. Well, I did not do that, but it was not an easy decision.

And then one Tuesday, things just became too much at work and I literally walked away. I remember being so relieved, happy and excited about future that day on the bus.

I’m proud of getting that job, doing well on it, but then trusting my instincts and leaving. 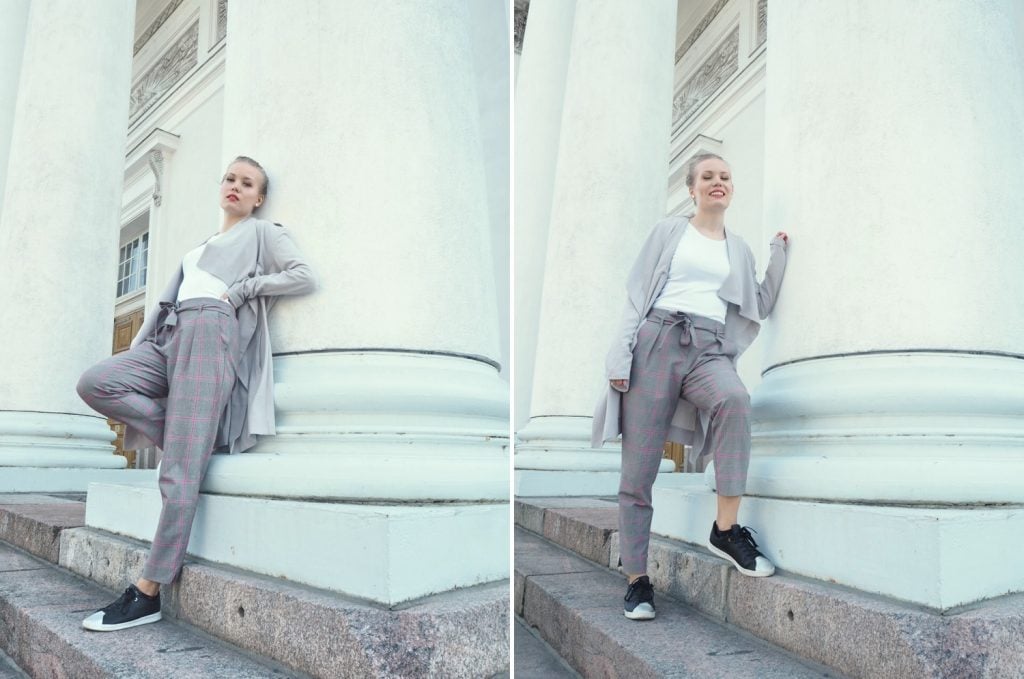 3. Starting a blog and pursuing a career of it

After I quit my job I had some time to really think what I wanted to do. And the answer was pretty clear, it’s always been. I wanted to be a blogger. I’ve always loved writing and I feel like I have a lot to say and give.

Though I still have a lot to learn, I have already learned so much. My writing has improved – especially my English. I’ve learned not only to write good articles, but also how to SEO-optimize them. I’ve learned to take better photos. And slowly, I’ve learned to be proud of what I do. To say it out loud.

This is probably the hardest thing to actually be proud of, since it’s so easy to compare myself to others. There are so many amazing blogs out there, amazing writers, amazing photographers.

But there is only one Charlotta Eve blog. And since I’ve found people stealing my content more than once, I guess I’m doing pretty good. And the fact that Elledecor.com featured me and my blog post in their post, I know I’m going in the right direction.

I’m proud of my blog and all the hard work I put into it. 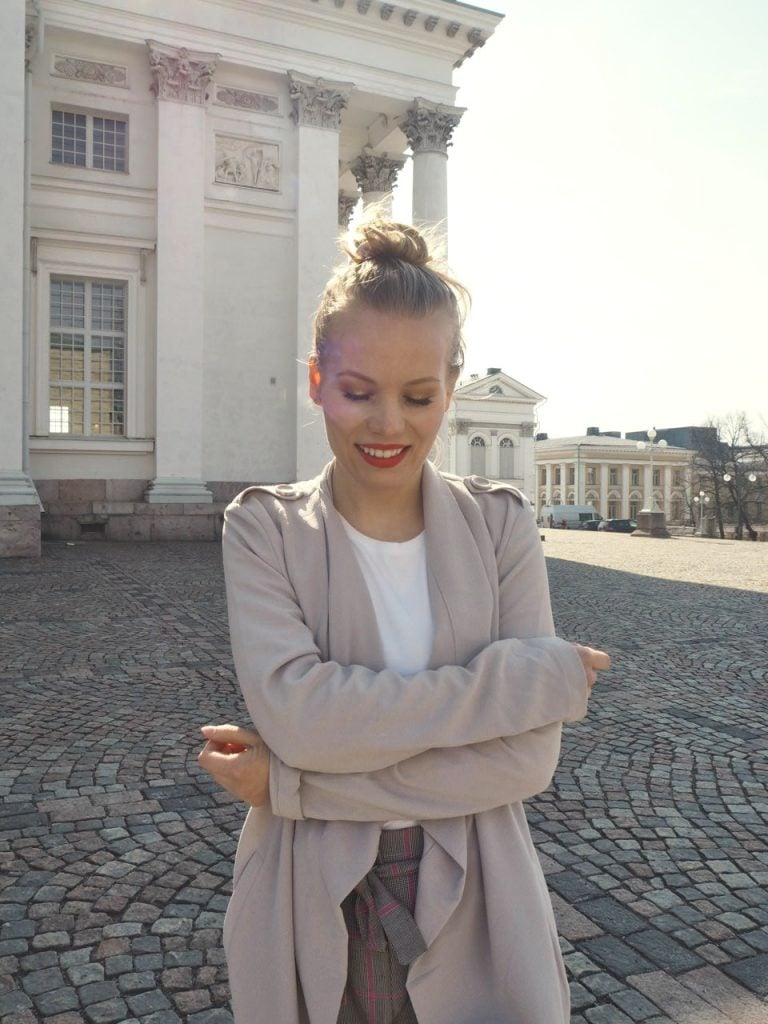